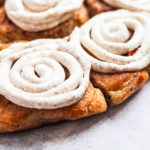 What’s in this low-carb recipe that makes these cinnamon rolls keto-friendly? For one, they have very few net carbs, they’re wheat- and gluten-free, and they’re high in good fats. Easy enough.

Mozzarella cheese is the perfect carb-free dough base to use for these keto cinnamon rolls because it’s sticky and gooey, so it replaces the gluten in white flour. It helps create the wonderful texture you love in a good cinnamon roll.

Full-fat mozzarella also offers some health benefits — especially if you opt for the grass-fed kind. Contrary to the fat-phobic nutrition advice you’re used to hearing, research shows that full-fat fermented dairy like cheese and yogurt has an anti-inflammatory effect that could be heart-protective, rather than damaging[*].

In fact, studies have shown that mozzarella may lower LDL cholesterol levels[*].

Upgrade to grass-fed, and you get even more benefits. Grass-fed dairy is rich in vitamin K2, omega 3 fatty acids, and CLA (conjugated linoleic acid), all of which offer heart health benefits[*][*][*].

CLA has also been shown to aid in body fat loss[*]. As far as macros go, mozzarella is a great fit for the keto diet. One cup of whole-milk mozzarella has 2.5 grams of carbs, 24 grams of protein, 25 grams of fat, and 336 calories[*].

However, cheese can’t act alone in providing a solid base for the cinnamon roll dough. It needs another low-carb flour substitute to help out.

Almond flour is a go-to ingredient for gluten-free bakers, and it also happens to be a perfect addition to a low-carb, keto diet. Just like almonds, almond flour has a rich nutrient profile. It’s high in vitamin E, folate, choline, manganese, and magnesium[*].

Because of their rich magnesium content, almonds can assist with blood sugar control, which is essential on the keto diet[*][*].

For every 14 grams of fat found in almonds, 9 of those grams are monounsaturated fat, which research has found to be beneficial for heart health and cholesterol levels. The rich antioxidant profile of almonds also offers major cardiovascular benefits and, in one study, helped reduce belly fat[*][*][*][*][*].

This recipe for keto cinnamon rolls calls for stevia, a zero-carb, sugar-free sweetener derived from a very sweet herb. (Tip: You can grow stevia in your own herb garden.)

The white powder or liquid stevia you find at the grocery store is a refined version of the herb, and it’s often used for baking and sweetening coffee. Just keep in mind that a little goes a long way — stevia is 250 to 300 times sweeter than regular table sugar[*].

While some people don’t love the flavor of stevia, there a number of non-bitter brands available that cut the taste that many people complain about. If you’re not a fan of stevia, there are a few other keto-friendly sweeteners that you can sub in for this recipe — but it won’t be a one-to-one substitution.

Monk fruit, erythritol, and Swerve are a lot closer in sweetness to sugar, so you’ll need to add a lot more to the recipe. One cup of these alternatives is about as sweet as two teaspoons of stevia.

It can lower fasting blood sugar, slow down the digestion of carbohydrates (which reduces their effect on blood sugar), mimic insulin, and improve overall insulin sensitivity, both in diabetic and non-diabetic human subjects[*][*][*][*][*].

Of all herbs and spices, cinnamon ranks among the highest when it comes to beneficial antioxidant properties. Potent in polyphenols, lignans, and flavonoids, cinnamon is antimicrobial, anti-diabetic, and anti-inflammatory. It’s been shown to have a positive effect on cardiovascular health markers, especially blood lipids[*][*]. Makes you want to use cinnamon on more than just dessert, doesn’t it?

Worried you won’t be able to indulge in your next family holiday feast or even a nice Sunday morning breakfast treat at home? Have no fear. Gather the ingredients and whip up a batch of these keto cinnamon rolls so you can indulge in sweet goodness without the guilt.