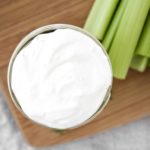 This keto ranch dressing recipe is as easy as putting all the ingredients in a bowl and stirring. But you can customize it even more while still keeping it keto.

For one, you can make your own keto mayo from scratch. Sure, it will make this homemade ranch a bit more time-consuming, but it’s a great way to ensure ingredient quality.

Here are some other tips and tricks to make this keto ranch dressing your own.

If your dressing is too thick for your taste or purposes, you can thin it out with some milk or heavy cream. If you’re dairy-free, you can use coconut milk instead. Whatever you choose, be sure to add the milk a little at a time because if you overdo it, it’s difficult to make it thicker again.

Sour cream is one of those things you probably haven’t considered making at home. But making your own sour cream is a great option when you’re concerned about added thickeners like carrageenan and guar gum.

Your homemade sour cream won’t be quite as thick as store-bought versions, but it will be every bit as good.

You’ll need a jar, lid, rubber band, and a paper towel or coffee filter. You will also need:

The directions are simple and your sour cream will be ready the next day. Here’s how to do it:

Apple cider vinegar can be expensive, especially if you follow the popular advice to get the kind that includes the “mother.” You can save money and have the best-tasting ACV you’ve ever had by going the DIY route.

Homemade apple cider vinegar is so simple that you can have some on hand at all times. Poured in a pretty bottle, it also makes a wonderful kitchen gift for friends and family.

You’ll need a half-gallon jar or pitcher, a coffee filter or paper towel, a rubber band, and something that will fit inside the jar or pitcher to use as a weight to hold the apples underwater. (Otherwise, they’ll float to the top.) You’ll also need:

As you can see, the ingredients list is simple — that’s how natural your apple cider vinegar will be. And don’t worry about the sugar… it’s there to feed the bacteria and most of it is consumed in the fermentation process, making this a keto-friendly option.

Your apple cider vinegar will be ready in about 6 weeks. Here’s what you need to do:

During the fermentation process, you may notice a thin, white-ish film on top. It will not be furry like mold. This is the developing “mother” and it is safe. It will usually fall to the bottom on its own. Your brew will likely look cloudy after a time. This is natural.

If you see anything that looks obviously moldy, it’s best to toss it and start all over. (Better safe than sorry.)

If mold develops, it’s likely that something contaminated your brew. It’s important to start with a squeaky-clean jar or pitcher and use only a clean spoon for stirring.

Whatever route you go, this keto ranch dressing is one recipe you’ll make again and again!