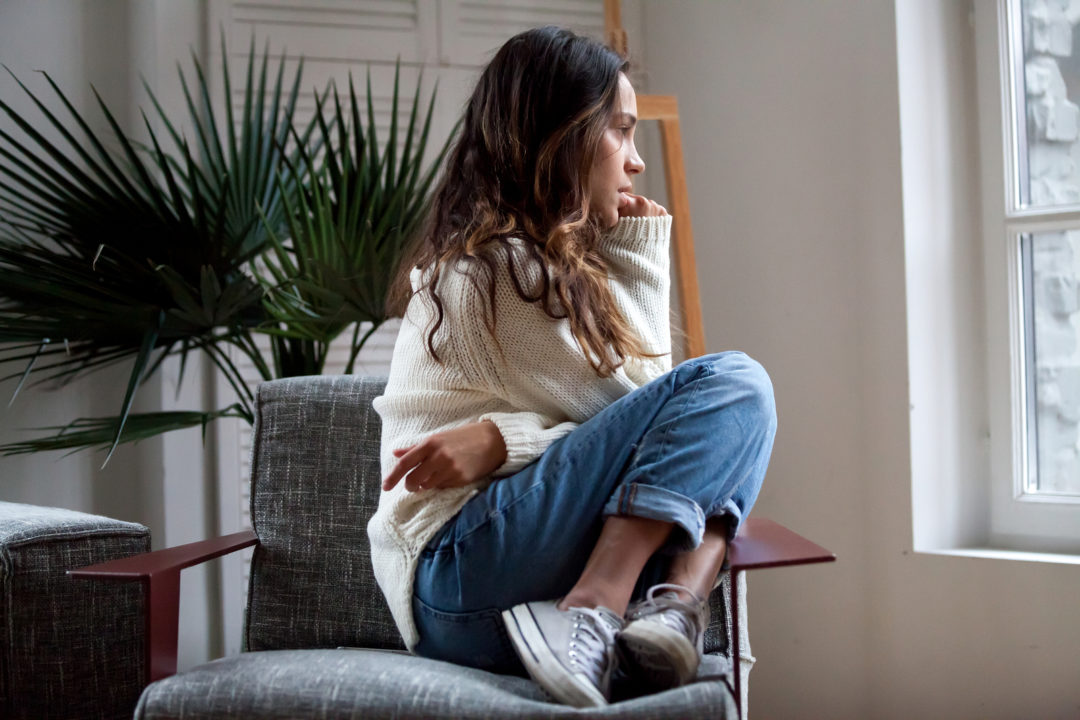 According to the American Psychiatric Association (APA), depression is a common and serious medical illness that negatively affects how you feel, the way you think, and how you act by causing feelings of sadness, loss of interest in activities, and decreased ability to work and function[*].

In the United States, researchers estimate that approximately 25% of the adult population lives with at least one mental illness, and nearly half of Americans will deal with mental health problems during their lifetime[*].

After anxiety disorders, moderate to severe depression is the most common mental health diagnosis, applying to nearly 7% of U.S. adults and about 3% of children under age 18[*][*][*].

The fact that depression often appears to have a physical basis has led some scientists and doctors to investigate dietary interventions such as the ketogenic diet as possible depression treatments[*].

In this article, you’ll learn about the significance of diet in mental health, why people sometimes feel depressed on the keto diet, whether going keto has the potential to help the symptoms of depression, and helpful tips to avoid depression and feel better.

Is There a Link Between Diet and Mental Health?

Research points to a clear connection between diet and mental health[*].

Although depression and other mental health issues are complex and usually have multiple causes, researchers are learning more about the relationship between food and the risk of psychiatric problems[*].

Highly-processed, poor-quality foods are linked to a greater risk of mental disorders, while a nutrient-rich diet may protect mental health[*].

Recent evidence suggests that low-quality diets result in inflammation and an unhealthy gut microbiome, which in turn raises the likelihood of depression[*].

Other explanations for the link between diet and depression include obesity, the possibility that some micronutrients have antidepressant-like effects, and the effects of polyphenol antioxidants on mood and depression[*][*][*].

Can the Ketogenic Diet Cause Depression?

That said, some case studies and anecdotal evidence do suggest that keto could make some people feel depressed.

In that particular case, the athlete might have benefitted from more carbohydrates and could have implemented a targeted or cyclical ketogenic diet.

The triathlete was also a vegetarian with pre-existing gastrointestinal problems, which could have confounded the outcome of the case study.

But perhaps the most common anecdotal cause of depression-like symptoms on keto is the keto flu[*].

Keto flu symptoms sometimes occur as your body adjusts to the keto diet. Fortunately, these side effects are temporary, but you can also use BHB ketones, MCT oil, and electrolytes to ease the transition as your body becomes fat-adapted[*].

People who take medication for depression might also need to adjust their medication when switching to a new diet[*].

If you’re new to keto and take antidepressants, you may want to ask your doctor whether you should consider a medication adjustment.

Finally, eating low-quality food on the keto diet is another potential cause of depressive symptoms.

The dirty keto diet is a “keto inspired” diet that encourages the consumption of unhealthy low-carb foods, but is best avoided for physical and mental health reasons.

Does the Keto Diet Help With Depression Symptoms?

To date, no one has conducted any clinical trials examining the effects of the ketogenic diet in clinical depression[*].

However, according to a 2018 review, numerous preclinical studies, case reports, and case series have demonstrated promising antidepressant and mood-stabilizing effects from going keto[*].

For example, a 2019 case study of a 65-year-old female patient concluded that keto “served to functionally reverse 26 years of [type 2 diabetes mellitus and] ameliorate two and half decades of chronic depressive disorder” as part of an individualized treatment plan that included psychotherapy and exercise[*].

According to a 2007 trial, individuals who used a low-carbohydrate ketogenic diet to lose weight reported greater improvements in negative affect (bad mood) compared to those who followed a low-fat diet[*].

Finally, at least two controlled studies of rodents have shown a reduction in depression-like behaviors when animals were placed on the ketogenic diet[*].

There’s a precedent for keto supporting healthy brain function, including in conditions like Alzheimer’s dementia and epilepsy[*][*].

In the next section, you’ll learn more about how the brain health benefits of keto could translate for people who experience clinical depression.

10 Ways the Keto Diet May Help With Depression

Here’s a list of the ways a ketogenic diet could potentially help with symptoms of depression, according to current research:

While these mechanisms are promising, large randomized clinical trials will be necessary to determine how effective the ketogenic diet is for treating people with clinical depression.

Stress is a risk factor for depression, while effective stress management lowers your likelihood of depression[*][*][*].

According to a 2018 review from the World Journal of Psychiatry, the following 12 nutrients from food are effective for the prevention and treatment of depressive disorders[*]:

The highest-scoring animal foods for preventing or treating depression were “bivalves such as oysters and mussels, various seafoods, and organ meats,” while the highest-scoring plant foods were leafy greens, lettuces, peppers, and cruciferous vegetables[*].

Other research suggests that fruits and vegetables high in polyphenol antioxidants can help prevent or treat depression[*].

Whether or not you use the keto diet, losing excess weight can reduce the risk of depression or improve symptoms of depression[*][*][*][*].

For example, a 2013 study found that for obese women with major depression, making behavioral changes to lose weight lessened their depression symptoms, and was also effective in combination with other depression treatments[*].

Sugar is a significant factor behind the adverse effects of processed foods on mental health[*].

According to a 2017 analysis published in Scientific Reports, “research confirms an adverse effect of sugar intake from sweet food/beverage on long-term psychological health [including depression] and suggests that lower intake of sugar may be associated with better psychological health”[*].

Insufficient sleep and sleep disturbances can raise your risk for depression but are also potential symptoms of depression[*][*].

In other words, sleep problems and depression are a two-way street.

Increasing your sleep duration or sleep quality could lower your depression risk or help you feel less depressed[*].

And if you’ve got other symptoms of depression along with sleep issues, you may also be able to sleep better by implementing effective treatments for depression.

#6: Let the Sun Shine On Your Skin

Vitamin D deficiency may increase the risk of mental disorders[*]. It also correlates to greater depression severity in people with depression[*].

Spending time outside in sunlight is a highly effective way to address vitamin D deficiencies, and sunlight may also offer other benefits for depression[*].

Beyond vitamin D production, sunlight on the skin may play an important role in the synthesis of serotonin[*].

Bright light therapy or sunlight can also correct circadian rhythm problems that are associated with depression[*].

Exercising in the sunlight is a time-efficient, effective way to combat depression[*].

If you’re fair-skinned and prone to sunburn, try going out during times of day when the sun is less intense.

Regular exercise increases stress resilience and is an effective treatment for depression[*].

Studies suggest that aerobic exercise and strength training both work for these purposes[*].

Structured exercise programs can be highly effective, but you may find that simply making a habit of being active as often as possible is more manageable[*].

Some evidence also suggests that daily walking works for reducing symptoms of depression[*].

When to Speak to a Professional About Feeling Depressed

If you struggle with depression or think you might be depressed, you should consider speaking to a mental health professional.

Friends or family are a vital part of a healthy support network, but they’re unlikely to be trained or experienced in helping people deal with mental health issues[*].

Even if you’re not going through a crisis, psychotherapy and other mental health interventions are highly effective for treating depression and other problems[*].

And if you’re not sure whether you’re depressed or not, counseling can still help you feel better[*].

If you’re currently feeling extremely sad or dealing with other severe symptoms that could be related to depression, or if you’ve had suicidal thoughts, please speak to a mental health professional as soon as possible.

For people inside the United States, SAMHSA has a free, confidential, 24/7/365 English and Spanish language helpline for people who are going through mental health issues, including depression.

In case you’re unsure where to find mental health resources in your area, Psychology Today offers a free, comprehensive directory of psychologists, counselors, and therapists in the United States and internationally, including low-cost or sliding scale payment options.

If you’re currently feeling suicidal or have made a plan to commit suicide, please call the free, confidential 24/7/365 National Suicide Prevention Hotline immediately at 1-800-273-8255.

Going keto is unlikely to have a lasting negative effect on your mood when done properly.

It’s too early to know for certain, but some evidence suggests that the positive effects of keto on brain health can help boost mood and lower the likelihood of depression[*][*][*][*][*].

However, there are plenty of other evidence-backed ways to feel better and reduce depression risk, such as exercising regularly, obtaining sufficient sleep, and managing stress[*][*][*].

If you think you may be depressed, consider speaking to a mental health professional about what you’re going through.